Students will investigate the difficulties in building a stable ecosystem containing higher organisms, such as tomatoes or other green plants, in a relatively small space.

An Ecosystem: An ecosystem is a community of living organisms interacting with each other and their non-living environment.

For this investigation we will provide a suitably prepared habitat within a sealed glass jar, into which we will place a small community of plants.

The micro-ecosystem in this project contains soil, an atmosphere, green plants, plus innumerable “stowaway” micro-organisms.
The only resource that enters and leaves the ecosystem is energy. The energy balance is important to an ecosystem. When too much energy enters, the temperature will rise until the energy input is exactly balanced by the heat lost. Conversely, when the energy output (as heat) exceeds the energy input to the system, the temperature of the system will decrease until equilibrium is re-established.

In order to achieve stability an ecosystem must attain a state of “dynamic equilibrium”. In this state the (average) rate at which resources, such as carbon dioxide, are consumed, is balanced by the rate at which that resource is replaced through the process of recycling.

A stable ecosystem is one in which, on average, a state of dynamic equilibrium exists. 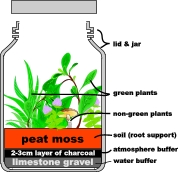 To build a simulated Martian greenhouse, use a large empty wide-mouth jar (with a lid), like the commercial-size food containers such as Heinz ketchup and mustard used by restaurants.

Prepare the soil. The bottom layer should consist of a thin layer of gravel covered with a layer 2-3cm (1 inch) thick of charcoal. These layers act as soil and air buffers to help reduce large swings in the moisture content, and chemical composition, of the atmosphere in your simulated Martian greenhouse.

For root support the top layer of the soil should consist of a layer of peat moss. (For a more realistic Martian soil-simulation, a mixture of sterile sand and clay can be substituted, but its water retention properties are much less than that of peat moss).
Finally, plant an assortment of small green plants; the tomato seedlings from this project would be excellent candidates. 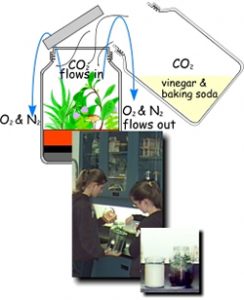 Note the alternative to this step using CO2 from a cylinder – see following.

Once the plants are installed you may wish to wait a few days to allow the plant roots to establish themselves in their new environment before proceeding to this step.

Prepare the rim of the jar with a light coat of vacuum grease or with a strip of Teflon plumber’s tape so that the lid can be installed immediately after the carbon dioxide has been poured into the jar.

If a compressed CO2 cylinder is available then CO2 can be added directly into the jar to displace the oxygen and nitrogen inside. 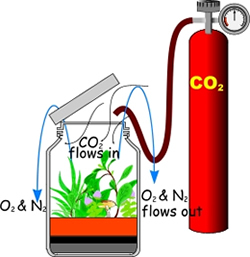 Before screwing down the lid, use a pair of tongs to insert a hot (120°C or 250oF ) bar of charcoal (which has been oven heated for at least one hour) into the jar. SEAL IMMEDIATELY!

Oven heating the bar of charcoal drives moisture and gases out of the bar. As the bar cools it will absorb an enormous quantity of carbon dioxide and will significantly reduce the gas pressure within the jar.

CAUTION: A sealed glass container should always be handled carefully.
Your simulated Martian greenhouse begins with a slight negative pressure of mostly CO2 but the pressure can drop dramatically because of carbon dioxide’s very high solubility in water.

Water on the other hand evaporates very rapidly under low pressure conditions. If your jar is left in a sunny or hot environment the pressure inside can rise well above normal atmospheric pressure, resulting is an exploding jar!

Always wear eye protection and gloves when handling your micro-ecosystem.

Tips for a successful Martian greenhouse

Experience has shown that in a sample of ten or twelve micro-ecosystems), some will survive only a few weeks, others will last a few months, and rarely, a few will survive more than a year. The challenge is to determine, if possible, the reasons for the failure of some and the success of others.

A class discussion on this topic may elicit many hypotheses explaining the failure/success of their greenhouse simulators. This provides an excellent opportunity to have students invoke the Scientific Method and to have them design further experiments to test their hypothesis.