Dynamic equilibrium (Energy in = energy out)

Ecosystem resources can be divided into two main groups:

Consider the Sun shining directly down on one square metre of the Martian surface (for example: at local noon on Mars’ equator on the day of the Martian equinox). The incoming solar energy is 590 watts per square metre. In scientific terms we would say the irradiation is 590W/m2.

The surface of Mars will heat up until a condition of dynamic equilibrium is reached; that is, until exactly 590 watts per square metre is radiated back into space. To radiate this amount of energy into space the surface will need to reach a temperature of about 115oC (46oC).  This seems quite hot, given that Mars is actually so cold! The reason is that, as on Earth, the full heating effect of the Sun occurs only for a brief period near local noon each day and only ever gets directly overhead in locations between the tropics (between the Tropic of Cancer and the Tropic of Capricorn).

At night the surface of Mars radiates energy into space so efficiently that even on the equator, nighttime temperatures can drop below -140°F (-100oC). As the Sun slowly rises in the Martian dawn its heating ability is weak, by noon the surface temperature has risen only slightly. As the Sun passes “noon” its angle above the horizon decreases… there is insufficient time for the surface to reach its maximum possible equilibrium temperature.

Averaged over the whole surface of Mars, a condition of dynamic thermal equilibrium is reached at a global average temperature of a bone chilling -50°F (minus forty six degrees Fahrenheit)!

Is it possible to raise the dynamic equilibrium temperature on the surface of Mars?

Since it is not possible to increase the solar irradiance we must arrange conditions so that the radiation of energy back into space occurs at a higher temperature. In the parlance of scientific terminology… we must shift the thermodynamic equilibrium to a higher temperature.

In order to reach equilibrium, that is, energy-in equal to the energy-out, the objects within the greenhouse must become warmer, so their shorter wavelength infrared radiation will escape into space through the glass.

The greenhouse will continue to increase in temperature until equilibrium is reached.

The image below shows a simple greenhouse, glass roof removed. In a state of dynamic equilibrium the energy in (a) (from the Sun) is exactly balanced by the infrared radiation (b) being emitted by the objects within the greenhouse.

Similarly, if more energy is radiated as infrared than is absorbed from the Sun then the greenhouse will cool down until equilibrium is re-established. 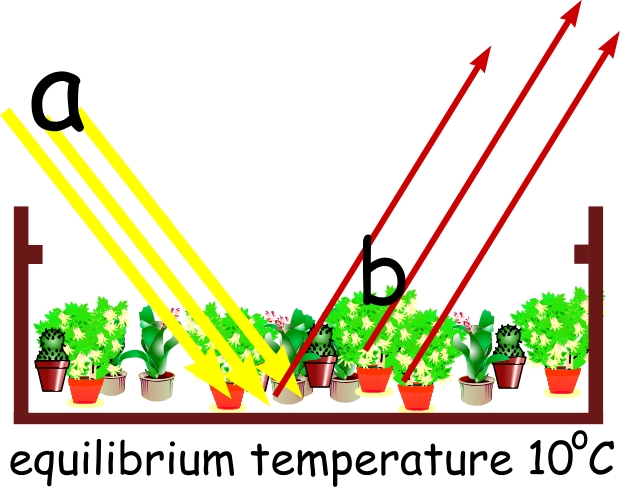 Similarly, if more energy is radiated as infrared than is absorbed from the Sun (c) then the greenhouse will cool down until equilibrium is re-established.

In the case of a glass covered greenhouse, the balance between in-coming and out-going radiation occurs at a higher temperature. 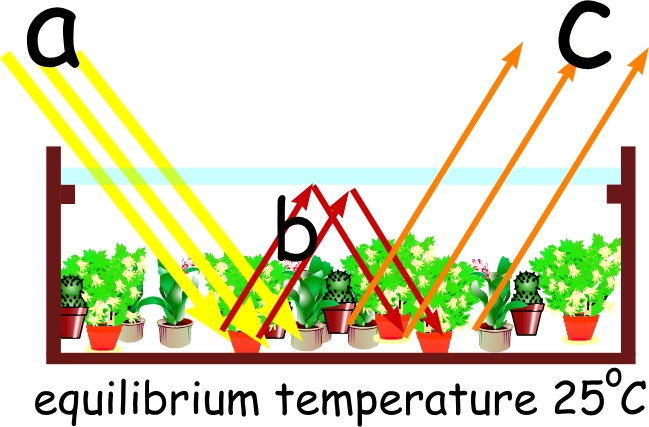 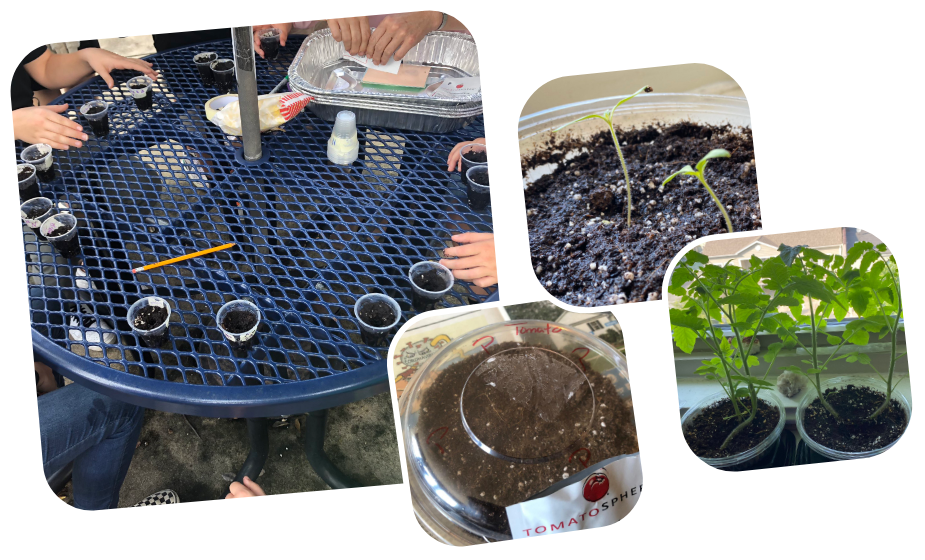